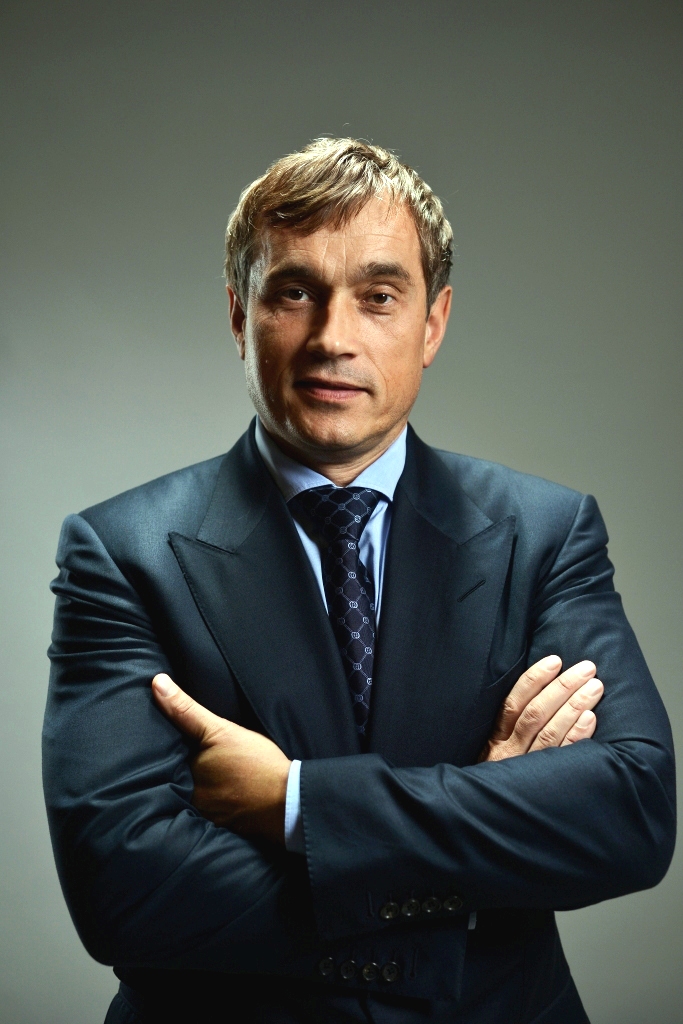 Khmelnytsky was born in 1966 in Bayan-Aul (Kazakhstan).

In 2003, Khmelnytsky graduated from the Law Department of Taras Shevchenko National University of Kyiv.

Khmelnytsky was also a people’s deputy of five convocations. He was elected to the parliament for the first time in 1998, representing the Party of Greens. During his tenure, he worked in various factions and deputy groups. In 2014 he finished his political activities as a member of the Sovereign European Ukraine deputy group. At present, he does not belong to any political parties.

“We are heading towards Europe where the functions of politicians and businessmen are clearly distinguished. For many years in Ukraine political activities were the only way for many entrepreneurs to protect their businesses. However, we should change this frame of reference. It is logical to start from yourself. So, I decided to focus on business and economy, while a new generation should come into politics.”

Vasyl Khmelnytsky’s priority is developing innovative industries and enhancing Ukraine’s competitiveness in international markets. His holding company, UFuture, has a diversified portfolio of assets in the fields of real estate, infrastructure, industry, renewable energy, pharmaceuticals, and IT. Currently, the company’s assets are estimated at $550 million, and the total capitalization of the businesses it invested in is more than $1 billion.

UFuture is a majority shareholder in UDP development company (specializing in large infrastructure projects), Kyiv Sikorsky International Airport (the second international airport in Ukraine by passenger traffic), national operator of outdoor advertising RTM-Ukraine, and a group of IT companies and an ecosystem of tech solutions ITernal. UFuture is a strategic investor in the pharmaceutical company Biopharma and UDP Renewables, renewable energy investment and development company. UFuture is also developing new business projects including UNIT.City innovation parks in Kyiv and Kharkiv, LvivTech.City in Lviv; Bila Tserkva industrial park and a manufacturer of modern electrotechnical systems, Plank Electrotechnic.

“It all began when Cisco invited me to the Silicon Valley of India – Bangalore. Twenty years ago, American companies launched many branches there. As well as money, they brought knowledge with them which allowed training of local professionals. And many of them have started their own businesses. Today India exports IT products worth dozens of billions dollars… This example inspired me. Ukraine has a strong basis for training math experts, however, we mainly train technical experts for outsourcing. Some 5,000-7,000 technical experts leave the country every year. If we want them to stay, we have to create attractive conditions for international companies which could open their offices here.”

“Once, after a meeting with students in the 10th and 11th grades, a good friend of mine who is a successful man called me. When he asked [the students] ‘who wants to become a businessman?’ only two persons raised their hands. The others wanted to leave to go abroad. He was even more upset when they asked why he was still here… They keep telling us, ‘Don’t worry, the next generation will be better.” It won’t, unless we take care of education, implant aspiration for development, and responsibility for their lives, to give young people an opportunity to achieve success in their native country.”

Since 2017, Vasyl Khmelnytsky has been heading the supervisory boards of the National Technical University “Kharkiv Polytechnic Institute” and Lean Institute Ukraine – a project designed to raise the innovativeness and the competitiveness of Ukrainian companies through the implementation of lean methodology. The entrepreneur is convinced that Ukraine offers unique opportunities for business development through the partnership of international and local companies. According to him, exchange of experience and knowledge, attraction of the best world technologies and management practices, support of small and medium-sized enterprises contribute to business success and are essential for the growth of the country’s economy.

UDP is one of Ukraine's biggest development companies. It was set up by Vasyl Khmelnytsky and his business partners in 2002. UDP's projects include unique residential complexes with extended infrastructure and innovative landscapes, as well as business centers, leisure complexes, and shopping malls.

UDP Renewables – the UDP group company, which works in the alternative energy sector. The company plans to launch new solar and wind power facilities with the total capacity of 300 MW by 2022. The first phase of the Dymerka SPP with 6MW capacity unit has been connected to the energy grid of Ukraine in August 2017.

BIOFARMA is a producer of high-tech and innovative plasma-derived medicines, recombinant preparations, probiotics, and drugs that are based on spore-forming bacteria. Vasyl Khmelnytsky, Kostiantyn Yefymenko, Horizon Capital, and FMO are the company's investors and shareholders.

RTM-Ukraine – the national operator of outdoor advertising, providing services for the production and placement of advertising in all media formats in 37 cities of Ukraine. The company was founded over 15 years ago and now offers more than 12,000 outdoor faces. Vasyl Khmelnytsky is one of the investors of the project.